My experience with a faulty Yaesu FT-470 which was kindly gifted to me by another amateur may help someone else who owns an FT-470 2m/70cm dual band talkie that develops a similar problem.

When I initially tried out the talkie, I heard my TX on another radio, so it sounded like it was working, but in fact nobody else could hear me, not even a station just a couple of miles away.

I also noticed that RX was terrible as well and I could only hear very powerful signals, but even at that, it was with noise. 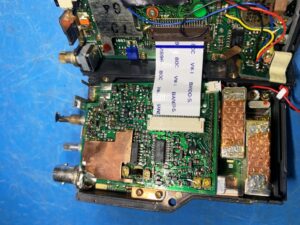 Once I got the top board separated and out of the cabinet, I noticed a very crusty looking solder joint below a stand off pin, which in turn was soldered, via solid core wire, to the centre pin of the BNC socket.

Things were a bit worse on the other side of the PCB once that had been removed from the rear cabinet.

A loose antenna socket had flexed the solid core wire soldered from the BNC socket to the stand off pin on the PCB, and in turn stressing the delicate print below.

Stranded flexible wire between BNC and stand off pin might have been better for preventing this from occurring.

I would add that the socket was not loose when the radio was given to me, otherwise that might have led me to the fault sooner, but looking at the scrape marks on the threaded, slotted circular BNC securing ring, it became obvious that the ring had been tightened with pliers at some point.

The PCB track leading to the stand off pin, that feeds the BNC, had separated from the board and from C2001 (470pF) which is in series with the antenna socket.

If you look closely at the photo (above), the fracture between cap and print can be seen.

When a 0.6mm soldering bit on a temperature controlled solder station was placed on this track, it fell off never to be seen again!

Oh well, not to worry, I’ll just solder to the end of the SMD cap then, I thought, given that it appeared to be ok in the photo.

Alas, no go – the capacitor had suffered from being pulled about too much by the flexing, and ultimately, broken print with the result that the antenna side contact of the capacitor disintegrated as soon as any heat was applied.

Doesn’t have to be SMD as it’s possible to solder one end of a “normal” cap to the board and the other end direct to the BNC at a push, although SMD caps are likely to be less inductive.

I managed to find a replacement 470pF cap on eBay which restored normal operation.

Effectively, I’d been TXing into no antenna!

Fortunately no other damage was done – I was initially fearful that the now rare and expensive Mitsubishi 2m and 70cm PA ICs might have failed.

One to watch out for, and the moral of the story is to make sure that the BNC socket on your FT-470 remains tightly secured otherwise this repair will become necessary at some point.

I trust of some interest and help if you experience a similar problem. 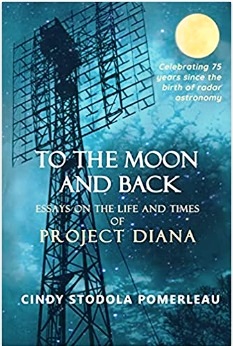 In this constantly changing pandemic situation, details of club activities can be found on the individual club’s website. A summary of activities in Scotland compiled by RSGB Regional Representative Tony, MM0TMZ can be found at www.wosars.club/radio-nets

“……………………The Bath Based Distance Learning team is now planning another course for the Full level exam syllabus. The course will run from the end of August to December this year. Students will receive weekly work packages via a virtual classroom and will have access to weekly online tutorials. Students will also have access to one of the remote tutors who will provide feedback and additional guidance where required. There will be no charge for the training but applicants must work through a pre-course classroom and quiz to be eligible for a place. The deadline for course applications is the 4th of August. For full details, and an application form, email g0fuw@tiscali.co.uk…………………”

The GB2RS News Service is seeking a volunteer in the Caithness and Orkney area. The successful candidate should have a good 2m FM signal into the GB3OC repeater. They would be joining the existing team that reads the news each Sunday morning at 0930 UK time. If you would like to find out more, without obligation, please contact the GB2RS News Manager, via email to gb2rs.manager@rsgb.org.uk

To celebrate the first one-way amateur radio QSO across the Atlantic that took place on the 12th of December 1921, there is a plan to re-create the event in December this year. Those involved are still looking for volunteers and anyone with vintage 1920s equipment that they might consider loaning for the accompanying exhibition. See GM0DEQ on QRZ.com for email details. (More info within POSTBAG – HERE )

The GB3FE repeater serving the Stirling area is now back in service, operating on reduced power.

The West of Scotland Amateur Radio Society is working on the new shack today and may operate for VHF Field Day It has a regular Sunday net from 11am on 145.425MHz. Wednesday sees a net from 8pm on 433.425MHz and on Friday there is an open net on 145.425MHz from 8pm. www.wosars.club.

Dundee Amateur Radio Club is taking part In VHF NFD today as well as the Backpackers contest. The Club holds nets on Sundays and Wednesdays from 7.30pm on GB3AG and GB3DD. The. Martin, 2M0KAU, 0776 370 8933.

Tonight @ 8 webinar; National Radio Centre at Bletchley Park will be closed; International Police Association has appointed Jim, GM0GMN; update from Ofcom to their guidance What you need to know as an Amateur Radio user; RSGB awards are open to everyone; The GB2RS service is seeking a newsreader to cover the Western Isles of Scotland; Churches and Chapels on the Air; Finningley ARS Car Boot bring & buy is scheduled to go ahead on Sunday the 25th of July; Wiltshire Radio Rally, Electronics Fair & Car Boot Sale is planned to go ahead on Sunday the 1st of August; ES2TT/0 from Saaremaa Island; VP2V/K3TRM from Tortola; ZD7GB; Coventry being the UK City of Culture GB1COC & GB8CCC; IARU HF Championship; the SFI ended up way higher than this, peaking at 94 on Thursday; Sporadic-E has started to tail off a little as we enter July;  solar flux index will decline from around 92 to perhaps 85 next week; We had a super North-South duct up the East Coast on Wednesday evening allowing a close-to 700km 10GHz Tropo QSO;

As an enthusiastic VHF dx-er in my early years in amateur radio, GB3VHF was one of the primary beacons to monitor in the UK. Living with my parents in Baillieston (E Glasgow or part of Lanarkshire in the early 70’s) my 5 el homebrew quad (replaced later with a pair of J-Beam 6 el Quads) was invariably pointing south – monitoring VHF or slightly to the west GB3CTC (Cornwall – long gone!).

Along with tropo enhancement (in the case of VHF & CTC) and other propagation mechanisms, auroral monitoring was carried out with the assistance of GB3LER (Lerwick, Shetlands – again long gone.)

Advance notice now that RSGB National Radio Centre at Bletchley Park will have restricted access for visiting radio amateurs wishing to operate the station, GB3RS on the 6th of June. On the 6th, the NRC will be running a special event station, GB2DAY to commemorate the 75th anniversary of D-Day.

This year the ITU World Radio Conference takes place and there is an important motion on the agenda to consolidate and extend access to 50MHz in Region 1, which covers Europe, Africa and Asiatic Russia. One of the national telecoms administrations that is actively supporting the proposal is the Czech Republic; unfortunately some other administrations are actively opposed.

The 200th registration for this year’s International Lighthouse Lightship Weekend has been received and it is from Latvia, which is a rare country for the event and a new lighthouse as well.

W7K celebrates the redefinition of the SI unit kelvin, which will take place on the 20th of May. This station will be operated from one of the most accurate temperature standards laboratories in the world, at American Fork, Utah. Times of operation will be 0000UTC to 2359UTC.

The 144MHz May Contest ends its 24 hour run at 1400UTC today, the 19th. Using all modes, the exchange is signal report, serial number, locator and postcode.

Today, the 19th, the 144MHz Backpackers contest runs from 1100 to 1500UTC. Using all modes, the exchange is signal report, serial number and locator.

Stirling & District Amateur Radio Society has a club meeting today and next Sunday from 10am till 2pm. On Thursday there’s a club night and Friday sees the start of the club DXpedition to Luxembourg. Contact Jess, MM3RCR, via email to secretary@gm6nx.com.

On Wednesday Lothians Radio Society is having a DF hunt. Contact Mike Burgess, MM0MLB, via email to secretary@lothiansradiosociety.com