Today Lomond Radio Club are attending the Lomond Rally. On Thursday there’s a club night. More from Barrie, GM4HEL, by email to gm0kzx@googlemail.com.

Stirling and District Amateur Radio Society club has a meeting from 10am to 2pm this Sunday and next Sunday including CW lessons. Thursday is the AGM. For details, email Jess, MM2RCR at secretary@gm6nx.com.

On Tuesday Kilmarnock and Loudoun Amateur Radio has a club activity and training night. Contact Len, GM0ONX, via email to klarcinfo@gmail.com.

On Tuesday Livingston and District Amateur Radio Society has a training evening. Details from Cathie, 2M0DIB, on 01506 433 846.

On Tuesday Moray Firth Amateur Radio Society has a night in the shack, setting up the radio cabin for another year. Contact Paul, GM8HWZ, on 0796 717 1189.

On Wednesday the West of Scotland Amateur Radio Society has a Solder Group meeting, and on Friday there will be a talk by Craig – MM6ZKO on GUI and 13cms. For further information contact Jack, GM4COX, at wosars.club.

On Thursday Wigtownshire Amateur Radio Club is on the air. More from Clive, GM4FZH, by email to info@GM4RIV.org.

On Friday Mid-Lanarkshire Amateur Radio Society is having a club night, tuition and radio operations. Details at mlars.co.uk.

On Saturday Inverness and District Amateur Radio Society is having a club night with a CW class at 6.45pm, and the main meeting with a speaker from 7.15pm. Contact John, GM0OTI, via email to InvernessRadioSociety@gmail.com.

Next Sunday the 16th, Lomond Radio Club are running a Bring & Buy event at the John Connolly Centre, 30 Main Street, Renton G82 4LY. Entry is free and doors open at 10am. In addition to the Bring & Buy, there will be traders and refreshments available, tea, coffee and hot food and more. Tables are still available and only cost £5. Please contact Bill, by email mm0elf@blueyonder.co.uk if you need any more details or are wanting tables.

Stirling & District Amateur Radio Society club has a meeting from 10am to 2pm today and next Sunday. Thursday sees a club night. For details, email secretary@gm6nx.com

On Tuesday Kilmarnock & Loudoun Amateur Radio Club is having a club night. Contact Len Paget, GM0ONX, via email to klarcinfo@gmail.com.

On Tuesday Livingston and District Amateur Radio Society is having a talk on DMR Operating and Principles. Details from Cathie, 2M0DIB, on 01506 433 846.

On Wednesday Inverness & District Amateur Radio Society is having a CW class at 6.45pm and main meeting from 7.15pm. Contact John, GM0OTI, via email to InvernessRadioSociety@gmail.com.

On Wednesday Lothians Radio Society is having a talk on Robot Wars and Rampaging Chariots with Dr Roger Hill. More from Andy Sinclair, MM0FMF, by email to secretary@lothiansradiosociety.com

On Thursday Lomond Radio Club is having a club night.

On Thursday Wigtownshire Amateur Radio Club is having a practical work night. More information from Clive, GM4FZH, by email to info@GM4RIV.org.

On Friday Mid Lanarkshire Amateur Radio Society is having a club night with tuition and radio operations. Details at https://mlars.co.uk/ 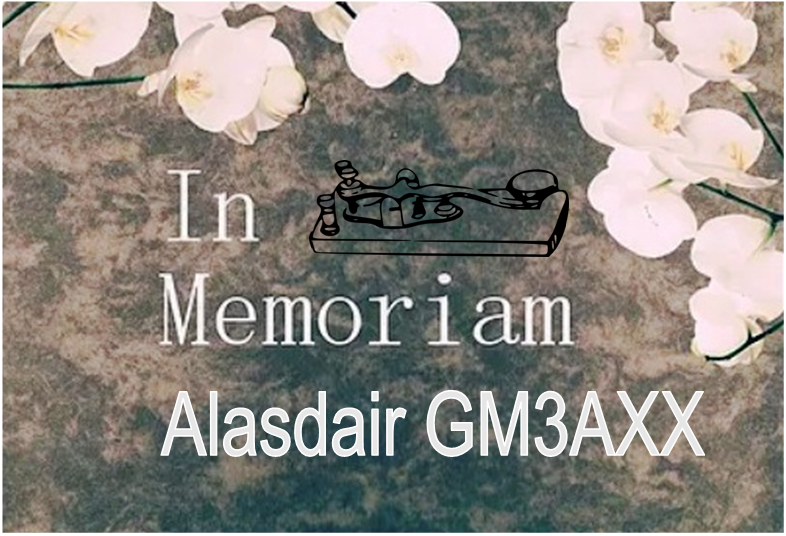 Alasdair was born in Darlington, England, in 1923 but it wasn’t long before the one who in years to come would wear a tartan tie at every opportunity and be a strong supporter of the SNP, moved north to his beloved Scotland. In fact, it was just 4 months, a move to Inverness with his family. They moved to Glasgow before Alasdair started primary school. Alasdair was the eldest in a family of four with Gillian, Helen and Farquhar born between 1925 and 1929. In the West End of Glasgow Alasdair attended Willowbank Primary and then Woodside Secondary. It was at Woodside where Alasdair’s love of radio started. His report card in fourth year spoke of his “considerable enthusiasm” for the topic and his “dexterity” in the construction of radio apparatus.

This love and these skills continued in jobs in a radio shop and then with Clydesdale Electrical, the radio and TV engineers, in 1941-43. Alasdair joined the navy in 1943 as a radio repair technician. He advanced to Petty Officer and radio mechanic in his three years’ service. His spell of duty took him to Gibraltar, Malta, Ceylon, Australia, Hong Kong and Japan. He visited Hiroshima only a couple of months after the bomb dropped there and took pictures to show the devastation that he saw. Alasdair applied his great intelligence in various ways in the navy including knowing the quickest way to the side of the boat. I’ll let you decide whether that was for safety or just in case of sea-sickness. After the war Alasdair worked for Philips as a radio and TV engineer. It was during this time that he met Margaret. In 1949 she was in a pram shop and he came in to the shop to do what Alasdair loved doing: to fix something. Instead he fixed his eyes (sorry!) on Margaret! They were married on 2nd February 1951 and stayed with Margaret’s Mum in Lambhill. Kim was born in 1955 and then Kennedy and Lindsay. They moved to Rigghead in Stewarton in 1968. Family holidays were often spent at a cottage in Glen Urquhart where time was always given over to catching up with friends and family, and to fixing things, of course, such as the 200 yard pipe he’d set up to bring water from a well to the cottage.

Alasdair loved exercise. He was a participator, not a spectator, fanatical about fitness: running, cycling, ice-skating, swimming, table tennis and more. He encouraged the family to join in, especially cycling and swimming whether the water was warm or cold! He won trophies at Stewarton table tennis club. Come the Spring, Alasdair would have the purple meths out to put on his feet to harden them up for hill walking so he could enjoy the outdoors to the full. This love extended to canoeing too. The first canoe he bought but the second he made at Stewarton night school. It still survives today – a credit to his workmanship! He even ran a 10k in his late 60s! Alasdair loved to be outside and active. Some families hand down jewellery as family heir looms, for the Frasers it was camping primus stoves.

From 1964 Alasdair’s work concentrated on scientific instruments when he started work with Pye Unicam, still part of Phillips. His job was to service and install analytical x-ray machines for research in university geology department and in large manufacturing plants, such as Ravenscraig, Blue Circle cement in Dunbar and Dounreay. As you can imagine, this job involved a lot of travel. Alasdair took his hobbies with him. Packed away in his guitar case, along with his guitar, were his swimming trunks, his ice-skates and his table tennis bat! Always prepared for exercise was Alasdair! These were precious items to him and he put a yellow radioactive sticker on his guitar case to ward off potential thieves. This proved very successful the time his car was stolen. When the police found the car and saw the sticker they put a cordon round the car. The guitar case and its precious content remained intact!

Another of Alasdair’s hobbies was motorbikes. He bought his first in 1952. In fact, he could drive a motorbike before he could drive a car. This was not for the sake of a solitary life. He had a side car and often took passengers pillion. He must’ve been a good driver as his grand-daughter, Helen, fell asleep riding pillion and his niece, Margaret, spoke of trips on the bike as “really cool”.

Alasdair’s favourite hobby was radio. The family showed me a framed certificate of his Honorary Life Membership of the Mid Lanark Amateur Radio Society, awarded to him for his “outstanding contribution to and furtherance of amateur radio”. He introduced 100s, if not 1000s, to this hobby. He taught at night school to help people pass their radio amateur exams and became well-known in radio amateur circles in Scotland. He was one of the earliest radio amateurs and indeed invented a particular aerial which is named after his call-sign GM3 AXX. Often at night Alasdair would be up trying to communicate internationally by radio. He would help Scouts and Guides with their communications badge work and at one point successfully contacted the space shuttle. It was a very sociable hobby too: the Friday social night at the radio club was incredibly important to him.

Alasdair was always a willing volunteer at John Knox church. He used his musical talents to help with the concert party, entertainment for old folks’ homes. He also read the Bible in church services but Alasdair preferred a behind the scenes role. Rather than be an office bearer in the church this humble man would be up a ladder fixing something! He set up and maintained the first sound system in John Knox, the first outside lights and the PA system in the hall at Christmas in case the high attendance meant people had to overflow into the hall. Even if the hall was not used I imagine Alasdair didn’t need much excuse to set it up.

Alasdair was a people person. He was always the first to put the kettle on when people visited. He loved a good story and was a great teller of jokes. He loved TV comedies: “Last of the Summer Wine” being his favourite. At his annual x-ray to check his health because of his frequent use of radio, he hid a tinfoil heart under his shirt to cheer up the technicians, such was his sense of fun.

Alasdair was an enabler, making things happen for other people. He received a certificate of appreciation for his work in delivering audio-books for the RNIB (Royal National Institute for Blind People). It is fitting of the man that he wanted Glasgow University Department of Anatomy to use his body for medical research, to help other people. Alasdair always wanted to fix things. Indeed, he never threw anything out if Araldite would fix it. Even as his mind failed and he was in the care home at Hallhouse he wanted to help. He was devoted to Margaret, especially in her ill health, never losing the desire to be doing things for her. This extended to the family. He asked Kim how he could help her when her husband Alasdair was in Africa on a recent charity bike trip.

Let me read some words his son, Kennedy, wrote in preparation for today: “We gather today to say farewell, to say goodbye to Alasdair, but in reality we have been saying goodbye to him for several years.  His dementia and mobility problems had gradually taken him from us bit by bit.  Occasionally there would be flashes of his old humour and charm but the clever, funny, active, resourceful man that he was, had been slipping into the shadows for some time and now that process is complete.  The tragedy of dementia is that it steals a person away in small steps and we are left holding on to our memories.  We are told that there will be no tears in heaven – they will all be wiped away.  Well, perhaps some tears will need to be wiped away – but they will be tears of laughter as Alasdair tells his latest joke or story.”

When I asked the family to sum Alasdair up, they said he was a people person, who lived life to the full, a loyal, devoted man who thought the world of his family, a wonderful Grandpa who will be sadly missed.