In this constantly changing pandemic situation, details of club activities can be found on the individual club’s website. A summary of activities in Scotland compiled by RSGB Regional Representative Tony, MM0TMZ can be found at www.wosars.club/radio-nets

It has been reported that the repeater GB3FE serving the Stirling area is still out of service which will impact all users, especially the Stirling nets today, and Monday and Thursday and Falkirk net on Wednesday. At present it is unknown when service will be restored.

Kingdom Amateur Radio Society is having to vacate its premises but is continuing to have a net on Sundays, Tuesdays and Fridays from 7pm on 144.750MHz. Contact Steve, MM0SKX, 07711 059 343 for further information.

Today Stirling and District Amateur Radio Society is open for outdoor activities and operating from 11am this Sunday. The Club is also open on Thursday evenings from 7:00 pm for further details, email secretary@gm6nx.com

And finally, The Loch Lomond net in the Vale of Leven has stopped for its summer break and will return first Sunday in October.

Mid Lanarkshire Amateur Radio Society now sees the Zello chat take place from 7pm on Friday, which then moves at 9.30pm to a Net on GB3KV at 9.30pm. The DMR Scotland net on TG23550 from 8pm on Wednesdays continues to operate along with the Thursday net from 8pm on 70.425MHz. Further details can be found at www.mlars.co.uk.

On Monday Edinburgh and District Amateur Radio Club has an operating evening. Contact Norman, GM1CNH, on 0774 094 6192.

On Tuesday Kilmarnock and Loudoun Amateur Radio Club is having a club night. Contact Len Paget, GM0ONX, via email to klarcinfo@gmail.com.

On Tuesday Livingston and District Amateur Radio Society is having a talk. Details from Cathie, 2M0DIB, on 01506 433 846.

On Wednesday Inverness and District Amateur Radio Society is having a club night. Contact John, GM0OTI, via email to InvernessRadioSociety@gmail.com.

On Wednesday Lothians Radio Society is having a talk SOTA and 13cm Escapades by Jack, GM4COX. Contact Andy Sinclair, MM0FMF, via email to secretary@lothiansradiosociety.com.

West of Scotland Amateur Radio Society has a Solder Group meeting on Wednesday. Friday sees a talk Munros on the Air by James Gentles, GM4WZP. For details, see wosars.club.

On Thursday Aberdeen Amateur Radio Society is having a video evening. Contact Fred Gordon, GM3ALZ, on 01975 651 365.

On Thursday Lomond Radio Club is having a club night. Details from Barrie, GM4HEL, via email to gm0kzx@googlemail.com.

On Thursday Wigtownshire Amateur Radio Club is on the air. Details from Clive, GM4FZH, via email to info@GM4RIV.org.

On Friday Mid-Lanarkshire Amateur Radio Society is having a club night with tuition and radio operations—for details see mlars.co.uk. 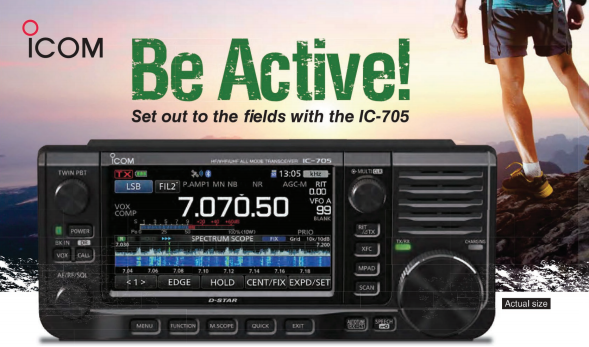 Advance notice now that RSGB National Radio Centre at Bletchley Park will have restricted access for visiting radio amateurs wishing to operate the station, GB3RS on the 6th of June. On the 6th, the NRC will be running a special event station, GB2DAY to commemorate the 75th anniversary of D-Day.

This year the ITU World Radio Conference takes place and there is an important motion on the agenda to consolidate and extend access to 50MHz in Region 1, which covers Europe, Africa and Asiatic Russia. One of the national telecoms administrations that is actively supporting the proposal is the Czech Republic; unfortunately some other administrations are actively opposed.

The 200th registration for this year’s International Lighthouse Lightship Weekend has been received and it is from Latvia, which is a rare country for the event and a new lighthouse as well.

W7K celebrates the redefinition of the SI unit kelvin, which will take place on the 20th of May. This station will be operated from one of the most accurate temperature standards laboratories in the world, at American Fork, Utah. Times of operation will be 0000UTC to 2359UTC.

The 144MHz May Contest ends its 24 hour run at 1400UTC today, the 19th. Using all modes, the exchange is signal report, serial number, locator and postcode.

Today, the 19th, the 144MHz Backpackers contest runs from 1100 to 1500UTC. Using all modes, the exchange is signal report, serial number and locator.

Stirling & District Amateur Radio Society has a club meeting today and next Sunday from 10am till 2pm. On Thursday there’s a club night and Friday sees the start of the club DXpedition to Luxembourg. Contact Jess, MM3RCR, via email to secretary@gm6nx.com.

On Wednesday Lothians Radio Society is having a DF hunt. Contact Mike Burgess, MM0MLB, via email to secretary@lothiansradiosociety.com

An interesting item about amateur radio was broadcast on the BBC World Service this week. It dealt with the importance of amateur radio emergency communications during the recent cyclone in India. You can listen to the broadcast, Digital Planet – Ham Radio Aids Cyclone Relief Effort, at www.bbc.co.uk/programmes/w3csy664

A BBC Earth PodCast featuring Eleanor Griffin, M6NWZ talking about her experience with an ISS link from Kings High School, Warwick was broadcast this week. Go to www.bbcearth.com/podcast, scroll to the bottom and listen to the one called ‘Looking Up’

Dayton Hamvention® takes place on the 17th to the 19th of May at the Greene County Fairgrounds and Expo Center, Dayton, Ohio, USA.

Members of Tynemouth ARC, G0NWM, are travelling to the Isle of Mull, IOTA reference EU-008, from Friday the 17th of May until Friday the 24th, where they will be operating using the callsign GS0NWM. Subject to conditions the group will be operating up to four stations across the HF bands on SSB, CW, RTTY, FT8 using Fox and Hound mode and they hope to have a go at VHF/UHF satellite operation. QSL is via m0urx.com.

This weekend you can expect to hear special event stations taking part in SOS Radio Week, Pubs and Clubs on the Air and Mills on the Air. Several of these stations are mentioned in local news this week.

Also today, the 12th, the Worked All Britain 40m phone contest runs from 1000 to 1400UTC. Using SSB only, the exchange is signal report, serial number and WAB area.