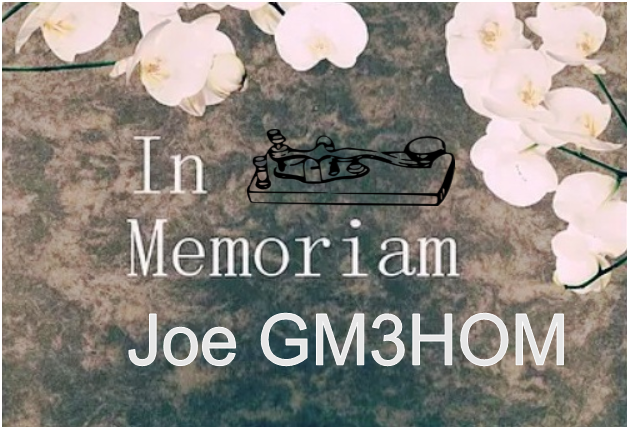 He was a continuous member of the Radio Society of Great Britain from November 1948 until his death. His 70th anniversary of Membership was marked in the November 2018 edition of RadCom.

Following his service in the RAF, Joe was hired by Decca. Working within their Navigation section, he was involved in the UK’s Blue Streak ballistic missile project in testing ranges in remote parts of Australia. Closer to home, and still with Decca, found him working in the Middle East and, latterly, remote parts of Scandinavia. Following his world sojourns, Joe was employed locally by Strathclyde Police, finishing his working career within their Radio Workshops.

Joe was an active member of local amateur radio clubs. He was associated with the RSGB (Glasgow) Club in the 1950s, the Radio Club of Scotland (RCS) in the 60s and, from 1970 up until his passing, the West of Scotland Amateur Radio Society (WoSARS).

Primarily an HF CW operator, Joe was also to be found on 2 metre FM chatting to fellow members of WoSARS and the local Glasgow amateur fraternity. And whenever he was home, he would give a club talk about some exotic location where he had been ‘posted’, or a piece of ‘kit’ that he had built or was building. Joe always finished his projects specifically in Hammerite Blue, because he reckoned it made the electrons within flow better. He also took the opportunity to take part in CW NFD with other club members on every occasion that it was possible.

Joe is sadly missed by his family and friends around the world, whether they be radio amateurs or not.